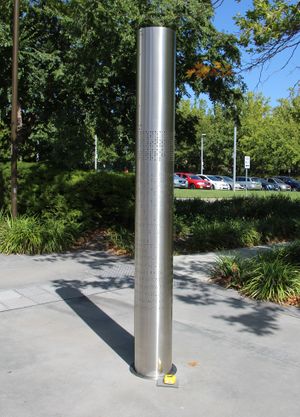 Pillar 8 contains a cipher comprised of differently sized dots (Decoded/Solved), an alphabetic railfence cipher (Solved) and a series of numbers around the bottom which probably form part of a cipher (Unsolved).

Pillar 8 is 2393mm tall and is the third tallest of the eight pillars.

Bubble or circle encoding on Pillar 8

The 'Bubble' area of Pillar 8 is a grid of circles of two distinct sizes (small and large). The grid is 15 rows by 52 columns. Other pillars use 26 characters so it's possible the circles are paired. However, for now, I will represent the bubbles as binary with a "1" for a large circle, and a "0" for a small circle.

The bubble code has been decoded by Bob Dovenberg who posted the solution to the Nkrypt Facebook page on 21 March 2013.

The bottom code on Pillar 8 is an alphabetic code. It begins with plaintext that is iteratively morphed into a rail fence cipher.

The railfence cipher was solved by Matthew Bienik and posted to the Nkrypt Facebook page on 26 February 2013 with the following result: