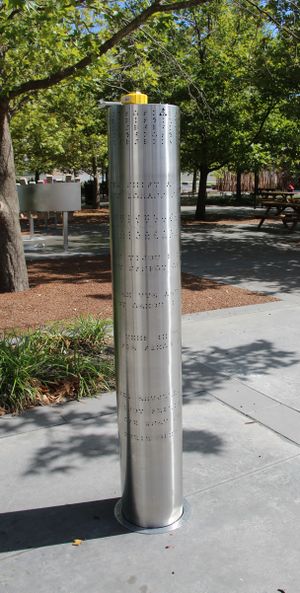 Pillar 7 is the shortest pillar. It contains a numerical cipher (Solved), a Caesar/Vigenere cipher (Solved) and a series of numbers around the bottom which probably form part of a cipher (Unsolved).

It also explains the method it uses to encrypt the alphabetic text. It is presumably a pillar to introduce participants to the concepts of encryption.

Pillar 7 is 1709mm tall and is the shortest (eight tallest) of the eight pillars.

The numerical grid on Pillar 7

At the top of the pillar is a grid of numbers of 5 rows and 26 columns. A triangular glyph surrounds a number (rather than pointing as in other pillars).

Decoded labyrinth style by Neonsignal on 17 March to read as a series of numbers that resemble geographical coordinates of the Canberra area:

When plotted onto a map, the coordinates point to 10 locations in the Canberra urban area specifically:

Noting "The first three correspond to the original location of Questacon at the former Ainslie Public School, the current Questacon National Science and Technology Centre, and the newly opened Questacon Technology and Learning Centre. The latter seven correspond to intersections in the suburbs of Farrer, Chifley, Rivett, Mawson, Florey, Hackett, and Banks. Each of these suburbs is either named after a scientist, or has its streets named after a scientist."

Link to the PDF solution page from the Questacon press release.

The remainder of the pillar is filled with a simple cipher - the Caesar cipher.

At the top is a plaintext which makes an obvious reference to Caesar:

Then below that, it pictorially depicts a letter shift. In this example, A>B, B>C, C>D and so on, with Z>A.

Below this is a cipher text:

Kufa most likely refers to Kufa, Iraq which was home to famed Arab cryptanalyst al-Kindi who pioneered frequency analysis.

The final four lines resist any number of simple shifts. It is possible that it is encoded using something like a Vigenere cipher.

An analysis using an online Vigenere breaking tool conducts frequency analysis to try to determine a key. It responds with a lot that start with "VIG", leading me to guess "VIGENERE".