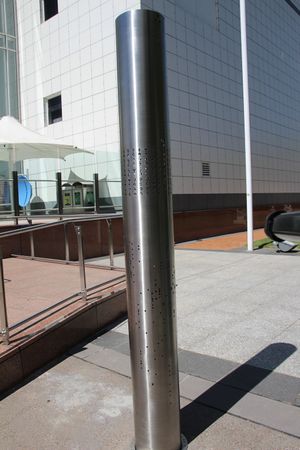 Pillar 3 in the daytime

Pillar 3 contains a cipher with hexagonal letters of the DNA molecule base pairs (Unsolved), a star-based cipher (Not transcribed and Unsolved) and a series of numbers around the bottom which probably form part of a cipher (Unsolved).

Pillar 3 is 2379mm tall and is the fourth tallest of the eight pillars.

Photograph of the DNA code grid

The hexagonal glyphs represent the letters of DNA: G, A, T, C in a highly stylised form - compiled in pairs as in DNA.

In the middle of the top line, a hexagon replaces one of the base pairs - it is marked in the transcription as "?".

Transcription of the DNA-hexagons is:

The DNA code was solved by Bob Dovenberg and a solution posted on 26 March 2013 to the Nkrypt Facebook page with the following explanation: 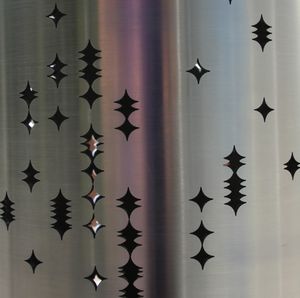 An example of the star code 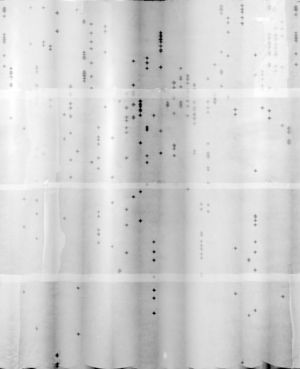 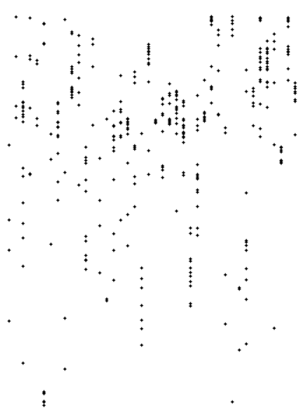 To be transcribed and photos compiled. See the image gallery in the interim. If you have any suggestions about a lettering or numbering system for describing these glyphs, please email me at dkrypt@dkrypt.org

The cipher consists of 368 astroids arranged in 42 columns. The columns are regularly spaced around 20mm apart. The astroids are about 15mm across, and in many cases overlap each other. They are irregularly positioned down the column.