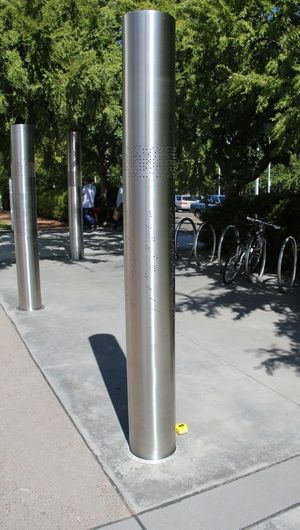 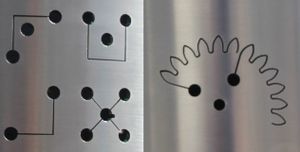 Pillar 2 contains two non-alphanumeric ciphers: a pigpen cipher (Solved), a cog-based code (Unsolved); and a series of numbers around the bottom which probably form part of a cipher (Unsolved).

Pillar 2 is 2347mm tall, and is the fifth tallest of the eight pillars.

Large view of the geometric code

The top code is a grid of geometric shapes. These are shown in a grid of 5 rows by 26 columns. There are 26 discrete symbols. A small number of symbols have what appear to be manufacturing defects - small circles attached to other circles - for more info, see the combined photograph.

The symbols are those of the Pigpen Cipher. Bob Dovenberg notes that S, T, U, V, W, X, Y and Z are somewhat non-standard representations and that the even rows must be decoded upside down.

Transcribed without the inversion on row 2 and row 4:

Using a labyrinth decoding, decoded by Bob Dovenberg on 18 March to read:

Which is German, from the Queen of the Night's first aria in the Mozart opera The Magic Flute and translates into English as:

Bob notes: "The composition is noted for its Freemason elements. Mozart was a Mason, and the Pigpen Cipher is sometimes called the Freemason’s Cipher. Also, the 1,2,3 at the bottom may represent the fact that the number three is important to Masons. It could also represent the three notes used in the Mason initiation ritual which notes also appear in The Magic Flute. Or it could be something else…" 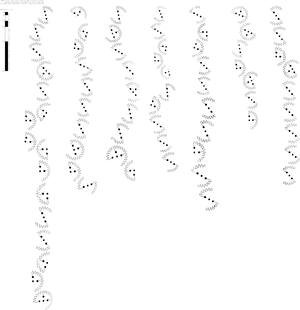 I'm somewhat at a loss even to translate this code into alphanumerical digits. The variables of the cog-glyphs are: number of internal dots, number of cog teeth (or number of quadrants covered by teeth), and angle. Please look at the image and see if you can advise how to transcribe this into text.