NKRYPT is a sculpture installed adjacent to Questacon (the Australian National Science and Technology Centre) in Canberra, Australia. The sculpture is comprised of eight stainless steel pillars with letters, numbers and glyphs laser-cut into them. The pillars are illuminated from within by LED lighting. NKRPYT was officially opened by Senator Kate Lundy on 4 March 2013.

NKRYPT presents a challenge to the reader to decode each of the pillars and claim a prize if decrypted before 31 December 2013. Further information is provided at the Questacon NKRYPT page.

On the opening day, Senator Lundy tweeted an encrypted message which forms part of the engagement with the sculpture. 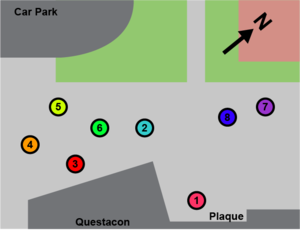 Map of the pillars on site

This is a website establishedto store information about the sculpture, and facilitate the decryption by other enthusiasts regardless of their ability to travel to Canberra, Australia. I am not related to the construction or operation of NKRYPT or Questacon.